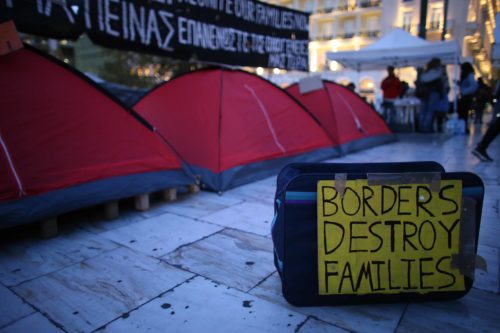 A photo documentation (with text) of the hunger strike of the 14 mothers and fathers which lasted from 1.-14. November 2017 in Syndagma Square, Athens. The families were protesting already since months for freedom of movement, everybody’s right on family unity and the best interest of all kids when they peaked their struggle with this last resort – a hunger strike. 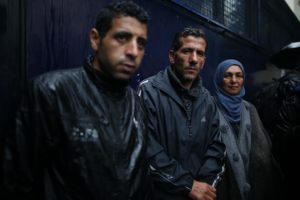 In a period where Germany along with other EU states is once again hardening its migration policies, thousands of families torn apart from war and dangerous escape routes face repressive policies and a lack of political will that keep them in unsafe places and far from their beloved. The EU-Turkey Deal and the closure of the borders in the Balkans in March 2016 ended a short period of freedom of movement which had saved thousands of lives through ‘safe passage’.
In the beginning of 2017 and after re-establishing Dublin Returns to Greece, Germany showed its ugly face also with additional limitations and obstacles concerning family reunifications from Greece to Germany. It began with delays in transfers, while in the meantime the lack of funding for the tickets from the side of the Greek state continued to create problems. And it culminated in increased and systematic rejections of family reunification applications from the Germany side wherever possible. Families on the move today have to fight their own way through to their beloved, risking their lives to be united.
While the 14 families of the hunger strike after almost 2 1/2 years in Greece have all finally reached their families in June 2018, thousands of people escaping war, conflict and poverty remain here without any guarantees of when and if at all they will see their kids, parents or spouses soon again.

The struggle goes on!

An Italy and Greece comparison: Where is the interest in denying the existence of the migrant workers?