The 23rd Anti-Racist Festival is here!

After two years of forced postponement due to the pandemic, the 23rd Antiracist Festival opens its doors on July 1, 2, 3, 2022 at the University Campus in Ilisia.  Three days of solidarity and three days of celebration!

The return of the festival is one of the few uplifting news in these difficult times. The Anti-Racist Festival is not only the leading event of the anti-racist movement in Greece, nor is it only a great artistic event with concerts, discussions, cultural events and great food. More importantly, the Anti-Racist Festival is a unique celebration of unity through diversity and a breath of resistance and solidarity in a stifling and oppressive environment.

“Pushback” to racism and war

This is the breath we need, today more than ever. Because we are surrounded by insecurity, the lack of a decent living for many, repression and lack of justice. Because the Russian invasion in Ukraine has caused the largest refugee wave in Europe since the Second World War. Because those criminal and illegal “pushbacks” have become the status quo in the Evros, the Aegean and the Mediterranean. Because refugee and migrant detention camps remain places where law and humanity are nullified. Because nationalism is once again becoming a tool for manipulating society. Because the far right is raising again everywhere in Europe, Greece included – despite Golden Dawn having been declared a criminal organisation and its leadership being in prison. Because the Roma are always treated as second-class citizens. Because discrimination and violence based on gender and sexuality are part of everyday life. Because our lives are becoming poorer and poorer.

So we meet at the Anti-Racist Festival to show that we can live differently, to celebrate this “togetherness” that can pave the way for a brighter tomorrow.

In the festival area there will be a Media Center

The whole Earth is our homeland!

COORDINATION OF IMMIGRATION AND ANTI-RACIST ORGANISATIONS

PROGRAMME OF THE 23rd ANTI-RACIST FESTIVAL

Intervention: Coordination of collectives from Attica

Interventions by members of the Sambanis family.

Mersad be a wolf

Alejandro Diaz with sounds and revolutionary songs of Latin America

“Centrifugal is the illusion that a body in a circular orbit holds, in which it escapes from that orbit. It is conventionally a force that is not exerted on the body, but helps to study motion problems.”

Rahmat Ahmadi was born in Afghanistan. Since 2007, he has been in Greece as a refugee. Since 2010 he has been working as an interpreter and intercultural mediator. In 2014 he started his first photography seminar at the Cultural Club of the University of Athens (P.O.F.P.A.). From 2015 to 2018 he attended photography courses at BlackBox Photography school.

It is in the workshops of collective photography, which take place in the hospitality centers of the social ΕΚΑΒ, that underaged refugees have the chance to feel the power of photography as a way of expressing one’s self with creativity, as a way of communication and as a means to justify and narrate different incidents. All of that is under the guidance of photographer Christina Vazou.

Teenagers from Afghanistan, Syria, Somalia, Egypt and Pakistan used the lens to unlock their feelings. In addition, other members of the group chose from their hearts a photograph each and bejeweled it with a title and some writings.

The way that memories, feelings and dreams are drawn from these photographs is magical.

It is a gift with witch we are able to connect with groups of people that seem different and understand that those things that unite us  are far stronger that those that divide us.

Camera on the shooting of Saint Barbara: Claudio Bolivar

Sound recording on the set of Agia Varvara: Yannis Antipas

The music was recorded at Shakti Studio

The author will be present at the screening.

A short documentary about the occupation of the 5th Lyceum of Athens. A courtyard on a sunny spring afternoon.

The author will be present at the screening.

In October 2020, the biggest trial in modern Greece comes to an end. The court’s decision is clear: The third largest party in parliament is a criminal organization. What is it like to cover such a trial for five and a half years? A conversation with the people who were there.

The documentary 5½ years is an independent production that premiered at the 24th Thessaloniki Documentary Festival in March 2022.

The filmmakers will be present at the screening.

Athens, Saturday of Easter 2020, during the first lockdown in Greece, yet, the first day of freedom for a seriously abused woman.

Support: To Mov (το Μωβ) and Yoga for Good

The true story of a 32 years old woman that managed to escape from her husband with the helo of an other woman and asked for asylum in Greece.

We follow her from the morning when her detention ends, up until midnight when she celebrates her resurrection along with people thay supported her. We travel with her to her dark past and her bright future. Old wounds are discovered but also new ways to achieve happines. Strength takes over the pain and hope takes over fear. But what about her daughter?

The film makers will attend

Poets from different countries will recite in their own language. The moderator of the event will present the theme of the poem in Greek.

for adults and children

We will hear tales and stories from three storytellers who will take us through space and time to a world of many worlds, a country of many countries, to think, see and build this colorful world.

Narrators: Penelope Vassiliadou, Lizeta Ziakou, Ioanna Vitsou (Graduates of the “School of Narrative Art” of the “Centre for the Study and Dissemination of Myths and Fairy Tales”)”

Para adelante, pa “lante, straight ahead…. This is the stance and attitude of the Andalusian Roma, inspired by the caravans’ journeys through time in search of new places, always looking forward, never back.

A famous singer, an actress, a drunk, a jabber and their friends sing and dance in different languages. Why would the do that you ask? But to pay the bill!

The students, teachers and pupils of Piso Thrania invite you to their multilingual play!

Piso Thrania is a group for teaching Greek and English to refugees and immigrants, for the performance students from different countries collaborated.

Singing and dancing are the students, the teachers and of course you, “our dear audience”!

The Anti-Racist Festival for our little ones!

During this year’s Anti-Racist Festival, the Children’s Playground will be open from 18:00 to 21:00, with activities for children, workshops and games! We will have a great time with our little ones, playing, singing, listening to stories and learning to share the world so we can change it! We are waiting for you!

18:00-19:30 activities for children with the Applied Theatre Educator for education and the community, Christina Sturaitis

THE TASTES OF THE FESTIVAL

The festival is delicious! We set the table at the 23rd Anti-Racist Festival with flavours from many countries. Cuisines and flavours both savoury and sweet from many corners of the globe. Egypt, Ethiopia, Afghanistan, Zimbabwe, Nigeria, Kurdistan, Philippines, etc. And of course, as always, Turkish cuisine, the rakadiko, Feleki’s souvlaki and El Chef. 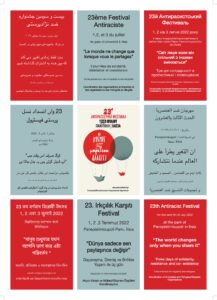