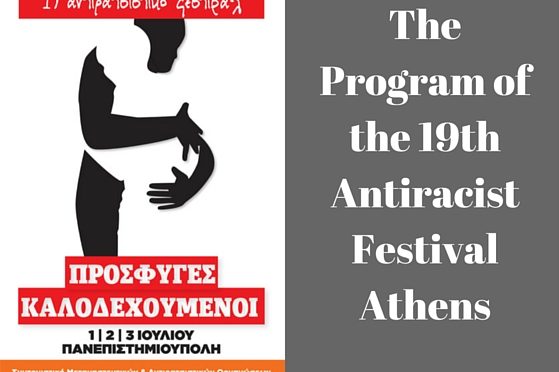 “Refugees Welcome”! The Athens Antiracist Festival, the big three-day celebration of unity through difference, returns to the Ilissia Campus of the University of Athens on 1,2,3 July 2016.

Especially this year, the yearly date for the Antiracist movement takes place at a particularly critical juncture for the refugee issue. The closure of the borders, the EU-Turkey deal of shame, the effective abolition of asylum, the deportations, the detention centres, the unacceptable “hospitality” conditions for refugees in remote camps, lead to situations in which rights are being disregarded, thereby affecting all of us.

Against the antirefugee policy of the government and the EU, we are organizing our resistance, putting forward our will to live together with refugees, to live in the same neighbourhoods, for our children to go to the same schools. We all struggle together, refugees and locals, against racism, poverty and the looting of the memoranda, with the common demand to live with dignity.
The 19th Athens Antiracist Festival, with its concerts, talks, thematic spaces, theatre performances, exhibitions, children’s play area, multiethnic comings, sends aloud message of solidarity, hope and togetherness. No matter how many fences they erect, we will live together!

All discussions begin at 19.00

•   The Middle East on fire: transnational, national and paranational terrorism

•   Meeting for European Coordination of Movements

•  Trapped Refugees in Greece: the disgrace of «hospitality centres» and the right to dignified living

•  Resistance and alternatives against the Third Memorandum

•  Permanent memoranda, privatisation of public property and commercialisation of the environment

Folk fairy tales from around the world. The storytelling teams “Ifantres ton Paramythion”, “Paramythanthos”, “Paramythoperasmata”, and “Imoun kid ego exei” share their love for the wisdom of fairy tales and the beauty of storytelling.

«Eashwayiy».  The multiethnic theatre group from “Piso Thrania” defines the “random” on stage. The performance is based on an excerpt from the poetry of Ashraf Fayadh: «Randomly – that is the word I have been looking for all this time. We live in a random world”.

Friday 1 July: “psychokinetic games” by the Apeiron Group | “Musical Journeys” by the Pedagogic and Art Education Centre “I Schedia”
Saturday 2 July: “The festival of physics” and “Balloon breaking” by the Piso Thrania team and the Initiative for Education without Discrimination
Sunday 3 July: “I got into the book and create my own world”

Souvlakia, mezze and Collective Kitchen. Traditional Souvlakia and mezze from “Rakadiko” could not be absent from the 19th Antiracist festival