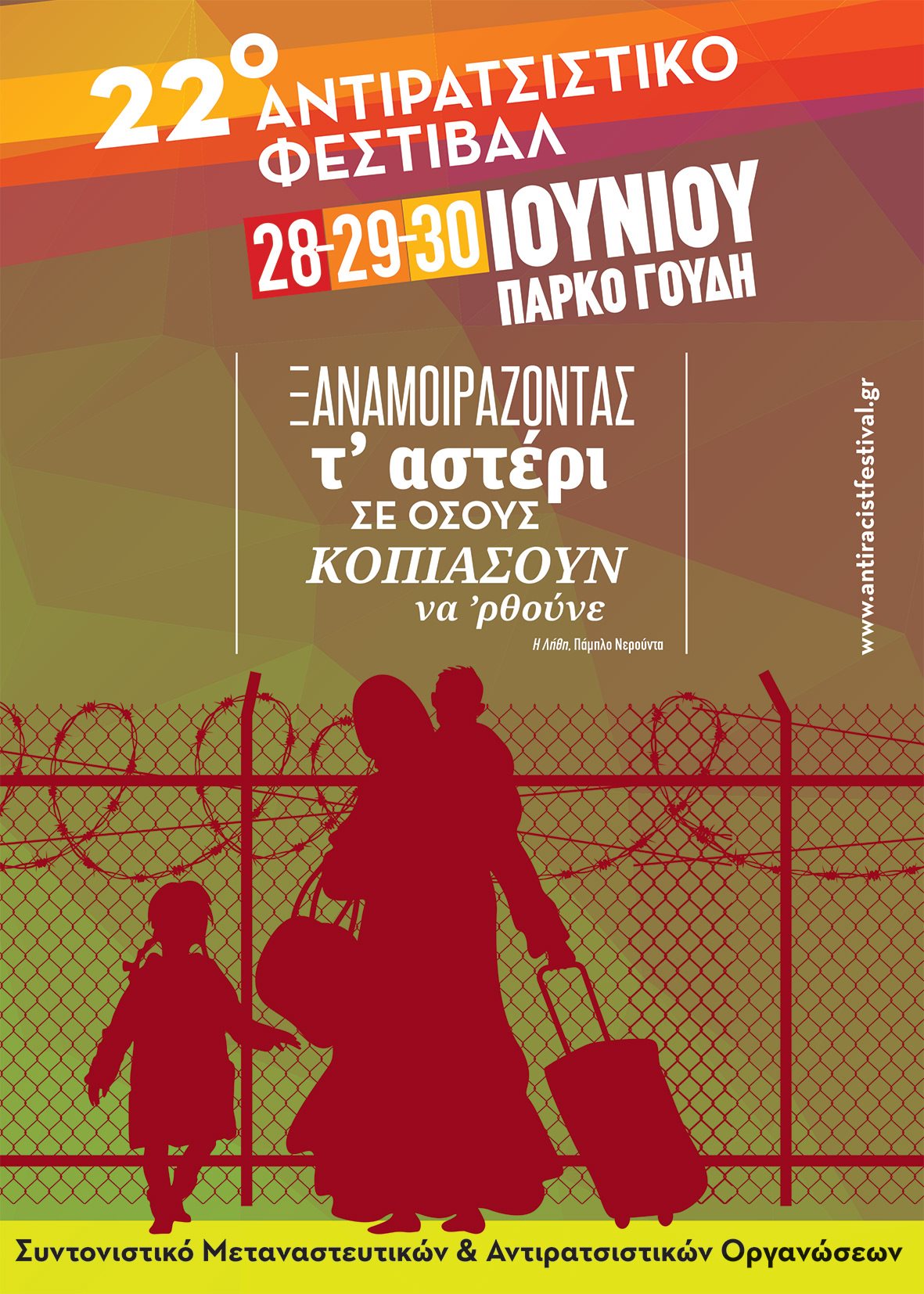 «…Spreading the star for those who come»

The 22nd Antiracist Festival on 28th, 29th and 30th of June, at Goudi Park, is a 3-day celebration where we meet, we discuss, we sing and dance, and we have fun. “Locals” and “foreigners”, passionate to live together, to organize the struggle against the cruelty and to honor the priceless gift of life.

28th, 29th and 30th of June. It is in the darkness that the stars shine! It is the people of the resistance that can light the way out. It is our will power to say the big “no” to racism, to the anti-immigrant policies, to fascists, the one that can challenge the gloom. It is the fight for equal rights and justice that can bring hope back to life, to make the stars shine in the darkness!

Music is one and at the same time it contains multitudes. With this idea, we created the musical program of the Antiracist Festival. Live concerts for all tastes, in three stages so every day can be a cohesive musical experience.

The best way to get to get closer with another person, is to sit with on a set table. The best way to get in touch with any popular culture is to taste the local cuisine. Because since the beginning of Humanity’s time, people came together around a steaming pot, where stories are narrated. Because ever since human beings can remember themselves the image of peace and happiness is identified with a set table..

At the 22nd Antiracist Festival we set a huge multi-cultural table, all of us, all together; refugees, migrants, locals. A table full of flavors and traditional dishes coming from 20 different countries where we can all fit in.

At the festival, there will also not be missing the Raki Mezedes from “Rakadiko”, the flavors of the Collective Kitchen “El Chef”, Hussein’s kebabs and Felekis’ souvlakia.

“Games from All Over the World: Theatrical game with creative workshops

Acrobatic Seminars for Children and Adults

In its first screening ever, the short documentary presents the martyrdom – journey of a civil war refugee in exile.

«Peace vs Piece. Part I: Resistance of Palestinian Women in Hebron» (To Mov, FemArtAct)

Filmed in Hebron, the documentary depicts the rough everyday life and resistance of Palestinians to the fragmented, historical town and the fights of women against the patriarchy.

Documentary on EAM Resistance in the occupied Athens. Fourteen narratives.

Entrance fee: 5€ per day | 10€ for all three days | Free for refugees, migrants and unemployed

Start time of the Festival: 6.00PM

Start time of the Discussions: 7.30PM

Start time of the Concerts: 9.30PM

Our Homeland, the entire Earth!