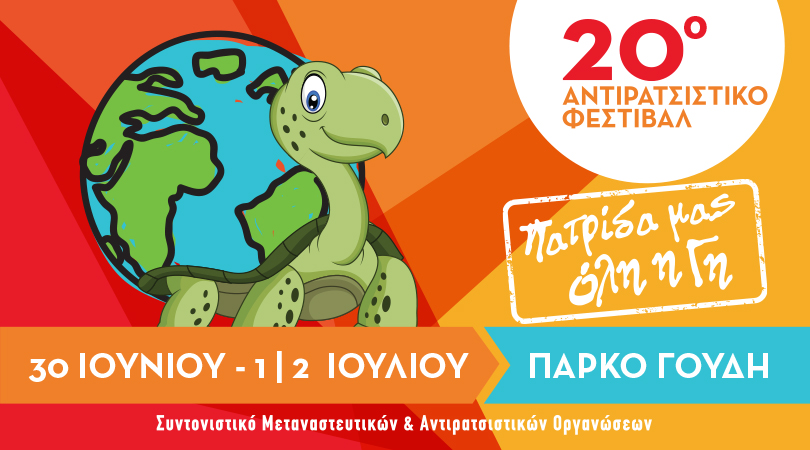 What stays the same and what changes in the face of those from above? How is Fortress Europe being transformed and what is happening on the islands and detention camps in “new” Greece? How are those from below and the Left organizing, fighting, and responding? Where and how are life, dignity, and solidarity winning? Many issues are opened up at the 20th Antiracist Festival. Find below the programme of the main and self-organized discussions per day. All discussions begin at 19.00.

1. From the anti-colonial struggles of the 20th century to the “new European colonialism”: challenges and resistances

Interventions by: Solidarians and residents at refugee housing squats

3. From Italy to the United States to Greece: feminist struggles and experiences

1. Global crisis: beyond the “extreme center” and the nationalist backtracking in Europe and the United States

2. The “new Greece”: apartheid on the islands, detention camps, blackmails and deportations

3. Common goods and creative resistance at the time of the memoranda

1. We want Federation: the politics of reunification of Cyprus

2. Against Fortress – Europe, wars and security policies. Solidarity without borders

4. From the trial of golden Dawn to the pogroms in Aspropyrgos: nazi activity and antifascist struggle

Pan-european mobilization for the right to abortion

The friendliest table in Athens, the table of the 20th Athens Antiracist Festival, will be set with flavours from many different parts of the world. Migrant/refugee cooking will once more take centre stage during the three days of the festival, as refugees and migrants, men and women from Asia, Africa and the Middle East will prepare savoury and sweet traditional dishes from their homelands.

CAMEROON beef with spinach and rice, chicken with plantain, greens and sauce

NIGER sweets with coconut or coconut and honey

Raki mezze from “Rakadiko” and dishes from the “El CHEF” Collective Kitchen will not, of course, be absent from the festival.

The concerts on Friday 30th June

A powerful beginning on the first day of the 20th Athens Antiracist Festival, rapping with favorites from the hip hop scene

Yet the concerts on Friday do not end here. The first night of the festival will be complemented by the well-known, unique, melodic sounds of

The concerts on Saturday 1st July

The second day of the 20th Athens Antiracist Festival will be a rock day:

Saturday’s concerts will continue with:

The concerts on Sunday 2nd July

On the third and final day of the 20th Athens Antiracist Festival, we will travel through alternating pop soundscapes, from dreamy to dark, on a magical musical journey, at the end of which we will reach…Ikaria!

And on the first (Ikarian) violin:

The concerts at the migrant communities stage

• Music from Iran and Afghanistan

• Dance and song from the Kurdistan Cultural Centre