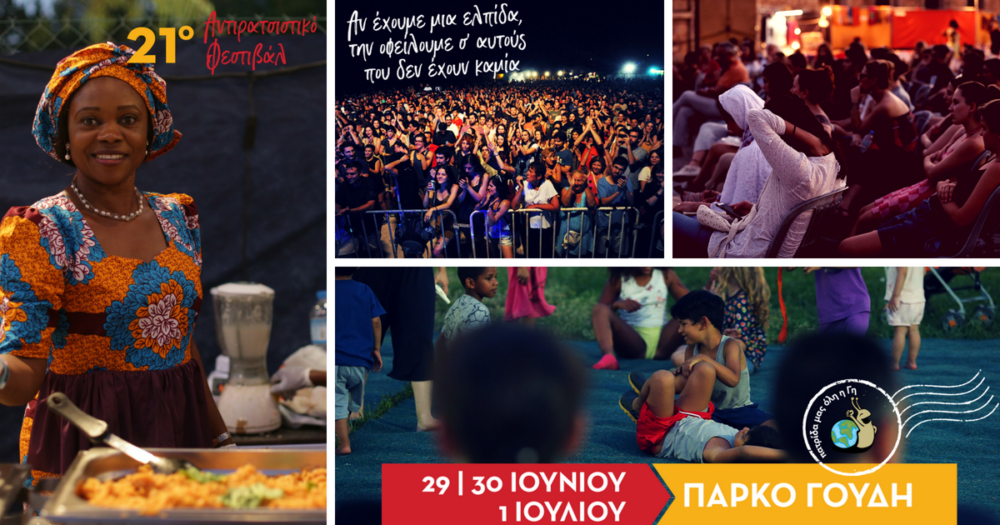 “If we have a hope, we owe it to those who have none”

Starting June 29 through July 1 we are meeting at Goudi Park. With discussions, concerts, exhibitions, events, multicultural cuisines and, above all, a lot of people. 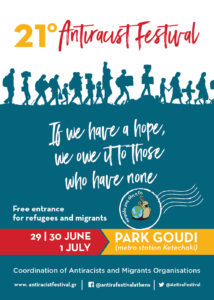 Music is one and much more at the same time. Starting off with this in mind, we set up the music schedule of the Antiracist Festival.  Live for all tastes, but shaped in such a way that every day turns into a cohesive musical proposal. Note that the live performances are to run on all three stages at the same time.

Let’s have a more detailed look:

Hiphop is going strong in Greece and this is so also at the Antiracist Festival. Lyrics of rage and metropolitan sensitivity in the soundtrack of a generation grown up in the Memorandum era.

On the stage of the migrant communities’ area (2nd stage)

Saturday is an electronic rove on the tracks the whale left at that magical journey that turned our lives around.

On the stage of the migrant communities’ area (2nd stage)

And our feast will go on with

It’s the songs that get to you in no time… and those that fit those moments in your life…and it’s Ikaria which we love indeed.

On the stage of the migrant communities area (2nd stage)

All discussions start at 7 p.m.

Coordinated by Kyriaki Klokiti (Network for Social and Political Rights)

Speakers: Tasos Theofilou (ex political prisoner), a member of the Irianna and Pericles Solidarity Assembly, a member of Rouvikonas

The most open and hospitable of all tables in city will be the one at the 21st Antiracist Athens Festival, which will be full of flavors and tastes from many parts of the world. The migrant and refugee cuisine will once again reign the three-day festival, with women and men refugees and migrants preparing salty and sweet traditional dishes of their homelands. In this savory feast will take cook people from Egypt, Ethiopia, the Ivory Coast, Afghanistan, Venezuela, Zimbabwe, Iran, Cameroon, the Social Network of Solidarity-Turkey, Kurdistan, Madagascar, Malaysia, Morocco, Mozambique, Nigeria, the Niger, Women of Nigeria, South Africa, Senegal, Sierra Leone, Sudan, Turkey-Kurdistan, the Philippines, students from “Piso Thrania”.

The Festival will lack neither the raki mezedes of Rakadiko nor the dishes of the El Chef collective kitchen.

“Fine Arts are in the streets”: Well known and less so posters by the pop art workshops of the Sorbonne and of autonomous political groups.

The exhibition is accompanied by a video and excerpts from the documentation cinema of the time.

Sketches on the refugee issue

(Conceded by the Greek Union of Cartoonists)

A MEDIA CENTER will run at the area of the Festival

Contribution: 5E/daý | 10E for all three days | free for refugees and migrants

Our homeland, the whole world!